In 1004 Emperor Heinrich II gave the Bishop of Trento the whole county of Trento including Val di Fiemme. In 1027 Emperor Konrad II gave the Bishop of Trento the counties of Bolzano and Venosta. The Isarco Valley and the Inn Valley were placed under the jurisdiction of the Bishop of Bressanone. The Lord-bishops of Trento and Bressanone influenced the social and cultural development of the Dolomite Ladin valleys. A number of strategically important valleys were occupied by people trusted by the bishops (Ciastel d'Andraz in Fodom, Torn de Vich in Fascia, Ciastel de Tor in Val Badia). Large parts of the area inhabited by Ladins were part of Tyrol.
Castle Tyrol, which reigns above Meran, was the home castle of the Tyrolean Dukes. It gave its name to the county which came into existence under Duke Meinhard II in the 13th century.
In 1363 the County of Tyrol fell to the Hapsburgs. The region was divided into areas of jurisdiction and administrative autonomy was encouraged.
As a result of land reclamation, (that is specific settlement made possible by easing the regulations on the cultivation of new land) an increase in population was apparent in the Ladin valleys.

Cardinal Niccolò Cusano (1401-1464) is known as one of the greatest theologists, philosophers, and natural scientists of his age. In 1450 he was appointed Bishop of Bressanone by Pope Nicolas V. In this capacity he challenged the Benedictine nuns in Sonnenburg Abbey to hold to the regulations of their order. It came to conflict with Abess Verena, who was supported by the Tyrolean Duke Sigmund. Cusano no longer felt safe in Bressanone and sought refuge in Castle Andraz in Fodom where he wrote several of his philosophical tracts.
In 1607 the Seminary for Priests in Bressanone was founded. This seminary also encouraged the education of priests who spoke Ladin. 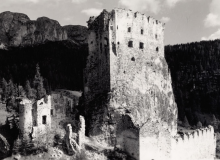 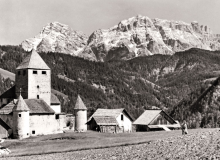 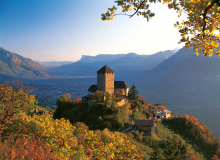 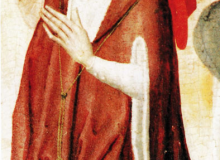 Maria Theresa (1717-1780), daughter of Karl VI, and an enlightened monarch, placed great emphasis on good efficient state administration.
In 1774 Empress Maria Theresa of Austria introduced a general school reform which stipulated compulsory schooling for all children between the ages of 6 and 12.
Her son and successor Josef II (1741-1790) developed her reforms further. Of particular importance for the Ladin valleys are the introduction of the civil law codex, the abolition of witch hunting and the secularisation of church led institutions including the Castle Sonnenburg (Pustertal). 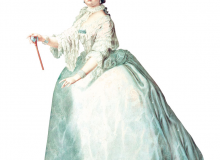 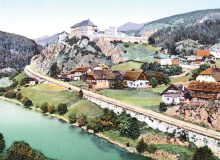 Napoleonic rule came to the Ladin valleys in 1806, when, together with Tyrol, they became part of the Kingdom of Bavaria. In 1809 the inhabitants of the Ladin valleys also took part in the struggle for Tyrolean liberty. Andreas Hofer is celebrated in his homeland as a hero and is a symbol of resistance against suppression by foreign powers.
After victory over Tyrol in 1810 Napoleon divided the area according to orthographic criteria into three areas, thus avoiding the risk of a campaign of revenge. One year later Cortina d'Ampezzo, Fodom and Fascia were made part of the Kingdom of Italy. In 1813 the Ladin valleys returned to Austrian control where they stayed until the outbreak of the First World War.
Another symbolic figure is the Ladin girl Katharina Lanz (1771-1854): The girl from Spinges. She was born in Al Plan. 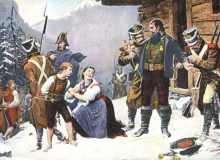 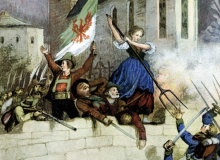 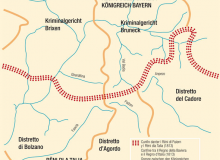